According to a non-profit that runs a global disclosure system for investors, companies, municipalities and even regions, companies taking strong climate action rose 46% just in 2020. Those rated highly by the nonprofit for their climate disclosures gained 5% more in the stock market than their peers over the past seven years.

And yet, the Nature Conservancy has gone old-school Papal, selling indulgences to companies to absolve them of their climate sins:

The Nature Conservancy recruits landowners and enrolls its own well-protected properties in carbon-offset projects, which generate credits that give big companies an inexpensive way to claim large emissions reductions. In these transactions, each metric ton of reduced emissions is represented by a financial instrument known as a carbon offset. The corporations buy the offsets, with the money flowing to the landowners and the Conservancy. The corporate buyers then use those credits to subtract an equivalent amount of emissions from their own ledgers.
The market for these credits is booming, according to BloombergNEF, a clean-energy research group. In the first 10 months of this year, companies used more than 55.1 million carbon credits to offset their emissions (equivalent to the pollution from 12 million cars), a 28% increase from the same period in 2019. While some of these credits are paying for projects that are truly reducing emissions, an unknown number represent inflated claims.
Few have jumped into this growing market with as much zeal as the Nature Conservancy, which was founded 69 years ago by a small group of ecologists seeking to preserve the last unspoiled lands in the U.S. In the seven decades since, the nonprofit in Arlington, Va., has grown into an environmental juggernaut, protecting more than 125 million acres. Last year its revenue was $932 million, which eclipsed the combined budgets of the country’s next three largest environmental nonprofits.
…
“For the credits to be real, the payment needs to induce the environmental benefit,” says Danny Cullenward, a lecturer at Stanford and policy director at CarbonPlan, a nonprofit that analyzes climate solutions. If the Conservancy is enrolling landowners who had no intention of cutting their trees, he adds, “they’re engaged in the business of creating fake carbon offsets.”
…
Barbara Haya, research fellow at the University of California at Berkeley, has studied these types of carbon projects for almost two decades. “We just don’t have time for false offsets that take credit for reductions that were already happening anyway,” she says.

Trees are extraordinarily important, but selling protected forests multiple times as carbon offsets is a phony practice. The wordplay around potential de-forestation and the urgency of doing more about a burning planet create a perfect field for corporate skullduggery. An environmental ledger, per se, that allows for continual stacking on both sides does little other than perpetuate the tried-and-false bottom-line thinking by corporations. They/we are going to actually have to do the hard stuff – slow boats, sun-powered planes, more density, more trains – to reduce net emissions. Real reductions, not carbon deals. Carbon offsets may once have been an easy way toward ‘doing’ something about climate change, but it is time to move away from them. 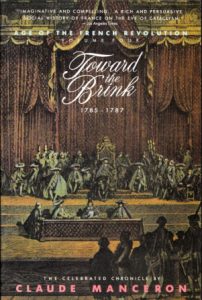 I hope this is an admonition:

New research in the Journal of the American Medical Association shows top earning Americans gained 2 to 3 years of life expectancy between 2001 and 2014, while those at the bottom gained little or nothing. Plenty of research has already shown that health and wealth are intertwined, and that they generally improve in tandem as you move up the income scale. But this year, the vanishing middle class and wildly divergent incomes among Americans have been central issues in a vitriolic race for the White House. Today’s JAMA research shows in the starkest terms yet how disparities in wealth are mirrored by life expectancy, and how both are getting worse.

We yield the floor to Claude Manceron:

The foundation of all revolutionary thought lies in this idea that now is what matters, and don’t try to tell us about anything else. As one scans the images of that now, the temperature begins to rise. And keeps on rising until it reaches that irrepressible indignation at injustice, the burst blood vessel of Revolution, the wrath of love.

I know everybody’s heard of Robespierre, but this guy Saint-Just was also fascinating:

When the Revolution began in 1789, Saint-Just was considered by many to be too young, and he was unsuccessful in his early attempts to get involved. In 1790 he took the Civic Oath and so entered the Revolution through the Jacobin party. The next year he wrote Esprit de la Revolution et de la Constitution de France which was a great success. Finally, in 1792, he became a deputy to the Convention. He was now able to make his speeches in Paris, and he quickly made a name for himself as he called for the death of the king. On July 10, 1793 he became one of nine members of the Committee of Public Safety and, along with Robespierre, very influential in the Reign of Terror. He was elected president of the Convention for the month of Ventôse. During this time he called for the arrest of Danton and Camille Desmoulins (a supporter of Danton). They were soon executed.Robespierre was now opposed by many, but Saint-Just stood by his friend and attempted to speak on his behalf. “I defend the man in question because his conduct has appeared to me to be irreproachable, and I would accuse him if he committed a crime. Great God! What kind of leniency is this that plots the ruin of innocent men?” he said in his last speech. Because of this action, Louis was arrested along with Robespierre, Philippe Le Bas, Couthon and Robespierre’s brother Augustin. On July 27, 1794, Saint-Just was sent to the guillotine with Robespierre and died for his Republic. The “Angel of Death” was only 26.

Maserati commercials during the Super Bowl? Clueless barking at a Moonless Tuesday.

Like it’s the garden variety sort of divisiveness that might propel us forward instead of say, back a couple of hundred years. Ah, yes, heads will roll. I’d much rather link to Spy, but because we’re about the green, (and you’re the priest) this VF article by Joseph Stiglitz cannot and should not go unread. At least not by you.

Economists long ago tried to justify the vast inequalities that seemed so troubling in the mid-19th century—inequalities that are but a pale shadow of what we are seeing in America today. The justification they came up with was called “marginal-productivity theory.” In a nutshell, this theory associated higher incomes with higher productivity and a greater contribution to society. It is a theory that has always been cherished by the rich. Evidence for its validity, however, remains thin. The corporate executives who helped bring on the recession of the past three years—whose contribution to our society, and to their own companies, has been massively negative—went on to receive large bonuses. In some cases, companies were so embarrassed about calling such rewards “performance bonuses” that they felt compelled to change the name to “retention bonuses” (even if the only thing being retained was bad performance). Those who have contributed great positive innovations to our society, from the pioneers of genetic understanding to the pioneers of the Information Age, have received a pittance compared with those responsible for the financial innovations that brought our global economy to the brink of ruin.

And now it won’t, go unread. The ruin part is mostly assured. Right?