That’s the percentage of a power plant’s maximum potential actually achieved over time. And Bloomberg reports that wide spread adoption of renewables is lowering the hitherto incomparable capacity factor for fossil fuels. This begins the virtuous cycle. 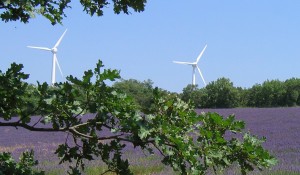 That’s because once a solar or wind project is built, the marginal cost of the electricity it produces is pretty much zero—free electricity—while coal and gas plants require more fuel for every new watt produced. If you’re a power company with a choice, you choose the free stuff every time.

Again, no use getting all Pollyannish about any of this. But the business news only reports the business view and it doesn’t really care if renewables are more profitable than fossil. Business only cares about that middle part – the profit.

So just move along. Yesterday in L.A.:

Meteorologist Jeff Masters notes “a station in the foothills at 1260? elevation near Beverly Hills owned by the Los Angeles Fire Department hit 119°F yesterday–the hottest temperature ever measured in the Los Angeles area, tying the 119°F reading from Woodland Hills on July 22, 2006.”

Weather historian Christopher C. Burt has a great post at Weather Underground, “The Remarkable Summer of 2010,” which concludes, “it is probable that no warmer summer in the Northern Hemisphere has ever been experienced by so many people in world history.”

Some further encroaching news in the continuing story of how ‘Obama is the greatest danger to our way of life’ brought to you by your friends at Shell, BP, NewsCorp and the Southern Company.

Not me, this time – malheureusement. But oil refineries. They’re going away. They’re not leaving today. But they’re going away. The article makes for an almost wistful, Christmas Eve nostalgia for how, pretty soon, we’re not going to have them to kick around any more. And boy will we regret that. Except we won’t.

Gasoline demand, which many analysts had long expected to keep rising for decades, is down sharply in the recession. And refiners are increasingly convinced that even after the economy recovers, demand will not grow much in coming years because of the rise of alternative fuel supplies and the advent of tougher efficiency standards for automobiles.

Plagued by boom-and-bust cycles of rapid expansion followed by sharp belt-tightening, refining companies have often struggled to operate at a profit. That is a contrast to the production side of the oil business, long a road to riches.

Even so, these are unusually harsh times for oil refiners. The recent drop in gasoline demand could result in more refineries being closed in the coming year.

Talk about shock and… aw. But this has very little to do with eco-anything, really. It’s just an economic situation, itself in transition, and away from where the fossil fuel industry thought they would ever go or be, which is not far from here – or actually about 2007. This is itself a problem with the imagination of your average B-school go-getter, seeing just far enough to be able to carve out their own little piece of the bottom line as it exists as the status quo. Then having the proclivity to channel all remaining energy into protecting that little slice of heaven. Instead of being able to recognize the shortcomings even of a system beneficial to them and foresee workable, if not equitable, adjustments to that system. Imagination fail, like a tractor beam. Like a circle, baby.

And this is transferrable to many issues and realms, including the political and HCR. If you doubt that, check out another op piece today, and witness the depravity that was Phil Gramm circa 1993. Hunted with dogs, indeed.

There was a funny quote by a Saudi prince/oil official in an article I read a few months ago, something along the lines of, “the Stone Age didn’t end because we ran out of stones.” The implication for the fossil fuel age being, of course, that instead of completely running out, we will graduate to an improved energy source. Whatever your feelings on that, it’s a good line.

But before we move along, as we do, such as the case may be, the House of Saud has a master plan to help themselves alongeven as their repositories are abandoned:

Saudi Arabia is trying to enlist other oil-producing countries to support a provocative idea: if wealthy countries reduce their oil consumption to combat global warming, they should pay compensation to oil producers.

The chief Saudi negotiator, Mohammad al-Sabban, described the position as a “make or break” provision for the Saudis, as nations stake out their stance before the global climate summit scheduled for the end of the year.

Can they take a hard line on that? Whatever your feelings, it must noted that the Saudis are working much harder to prepare for an uncertain future than we are, even taking preposterous hard lines in upcoming negotiations that will will wean us off of their product. It’s a question of need, of course, except that we need to get creative like this, as well. But instead, we largely continue to dissemble about what we will, should or might be willing to do, like it’s a waiting game and we only need to last through to the next iteration of… some variant of what we’re already doing. People aren’t even that interested in the upcoming talks in Copenhagen, talks that could create new sets of goals for emissions reductions that could have very significant effects on economies the world over, that could (but not like magic) reset the developed world on a path toward transition and incentivize the developing world to follow along. But most of the moral high ground will likely be compromised away with  easier to reach, lower impact targets that everyone can agree on – more stones to decorate the third place age recital.