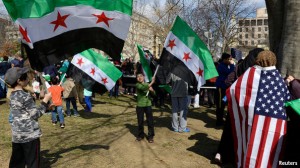 and none have been accused of involvement in domestic terrorism aimed at the US homeland, as pointed out by The Economist and included in Juan Cole’s excellent list of why we shouldn’t be so cowardly about accepting refugees:

8. The US owes these refugees. Without the US invasion of Iraq in 2003, there would have been no al-Qaeda in that part of the world, and no al-Qaeda offshoots like Daesh/ ISIL. Why do the governors (most of whom supported the invasion of Iraq) think the US can go around the world sowing instability and being responsible for creating the conditions that lead to millions of refugees but then can avoid the responsibility of ameliorating those broken lives?

Number 8 is important but the whole list is good. As Pierce pointed out, when the president of France confirmed yesterday that they would accept 30,000 Syrian refugees, the argument is effectively over. Sorry, this pandering foolishness must end. Yes, people can be and are scared. But the ones we should be focused on are those forced to leave their homes with young children. The government of France is thinking post-nuclear energy and developing off-shore wind farms in the North Atlantic:

Long reliant on nuclear as its chief source of energy, France is having to think long and hard about its energy strategy in the face of increasing public questioning about the safety of nuclear after the Fukushima disaster and greater evidence about the potential future high financial costs of the technology. The decision by the French government late last week to award tenders to build offshore wind farms to produce 2 GW of energy suggests that wind power is high up the Elysée’s list of alternatives to nuclear.

French energy minister Eric Besson said the decision would create up to 10,000 new jobs and “position France among the leaders of the offshore industry,” when making the announcement that a consortium led by energy giant EDF and engineering firm Alstom had won a bid to build three wind farms off the coast of northern France. Spanish energy firm Iberdrola and French engineering giant Areva secured the rights to build a fourth farm, he said. The two consortia are expected to invest around €7 billion to install 2GW of offshore wind energy capacity, according to Besson.

I’m sure all kinds of batailles are raging there about whether climate change is real, too.

“Vermillion in the orange shadows, on a cold, fine day,” Pierre Bonnard wrote in a sketchbook on one of his daily walks near his home, at Le Cannet, north of Cannes. Born in 1867 in a suburb of Paris, he settled in the South of France in 1926 with his reclusive wife, Marthe, remaining until his death in 1947. Such atmospheric observations infused the paintings that dominated the artist’s last three decades: window-framed landscapes and radiant domestic scenes depicting his wife going about her day. “The late interiors give you an understanding of how truly modernist he was,” says Dita Amory, a curator with theMetropolitan Museum of Art in New York, who has organized the first exhibition devoted to these works, opening January 27. “Shadow is never gray or black. It’s violet or purple.”

Bonnard made his mark early as part of the Nabis (“prophets” in Hebrew), the self-named group, including Maurice Denis, Édouard Vuillard and Paul Sérusier, that met at the Académie Julian, in Paris, in the late 1880s and experimented with suppressing perspective by using decorative pattern and flat areas of color. In the first decade of the 20th century, Bonnard struck out on his own. Dividing his time between the city and the country, he painted active street scenes in Paris and worked with professional models. By 1912 — when he bought a small house in Vernonnet, near Giverny, and his life with Marthe became more secluded — he had forged a distinctive technique, using oppositional hues that vibrated across his spatial fields.