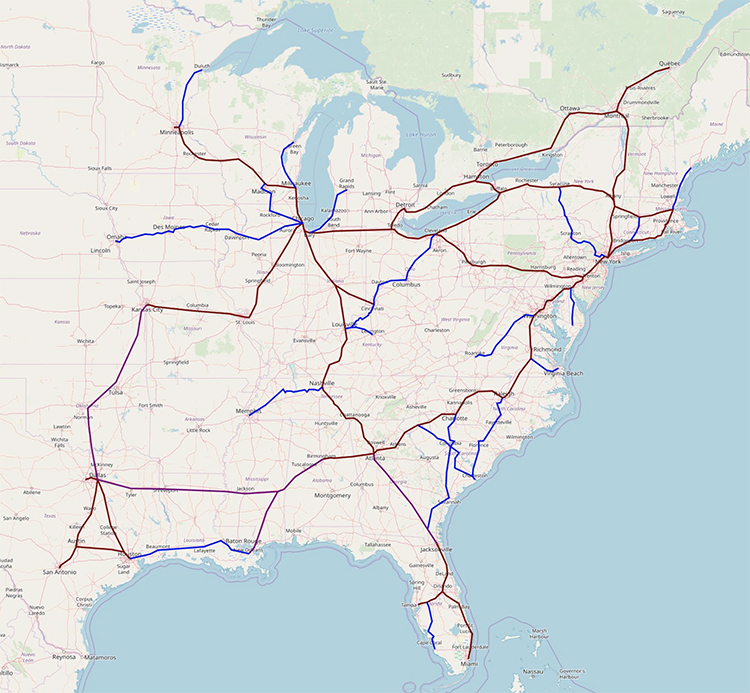 If you build it, will they take them? Trains, that is, super, high-speed and just regular intra-city transit. And Buses. Buses! But before even the lowest-frills fancy stuff, fix the bridges:

Most, if not all, Americans support the idea that bridges shouldn’t collapse as you drive over them, yet there are 44,741 bridges in the United States that are rated “poor” by the Federal Highway Administration. Nearly 45,000! That’s out of about 616,000, meaning that about 1 in 14 bridges indexed in the United States receive the government’s lowest rating.
But wait! It gets worse. The three ratings used — good, fair, poor — are simply reflections of the lowest rating a bridge gets on the condition of its deck, superstructure or substructure. (If you think of a standard highway bridge, the deck is what you drive on, the superstructure is what supports the deck and the substructure is what holds up the rest of it.) Those values are assessed on a zero-to-nine scale, with the average score for all three components being about 6.5 nationally.

There’s handy searchable map at that link where you can see the bridges in your area that need maintenance. Yikes! There are multiple tons of them.

It’s also important that the Biden Infrastructure bill includes, among many other things, no money for expanding roads. Stop expanding already uncross-able roads and intersections. The BIKE is the answer, not the ambulance. This is one of the subtle keys to the shift in transit. And I’ve written previously about taking Amtrak below Richmond, VA. The trains themselves are very dated, but it’s the rickety tracks beneath them that feel like such a hazard. It’s a disgrace, and like the state of the postal system, it’s decline by design. It’s been left in purposeful, deliberate disrepair.

So there’s plenty to fix, and feel good about while we’re doing it. Not feel triumphant – it’s not necessary. Just responsible for taking care of our sh*t and making it useful. Buy yourself a nice pen with what’s left over and write someone a letter. You might get one back. Write the next one on the train. Feel romantic, be moved. This pains me. And it should you. This isn’t the point of the article, though it is its subtext.

We are used to thinking of Venice as a city in peril, a glorious relic of human creativity that is about to go under any day now – and suddenly the end looks closer. But there is another point of view. Venice is no longer alone in its peril. In the past few weeks we have even seen New York in peril. As climate change makes extreme weather more frequent, Venice looks less like a victim of the sea and more like an old survivor that can teach the rest of the world how to live with water.