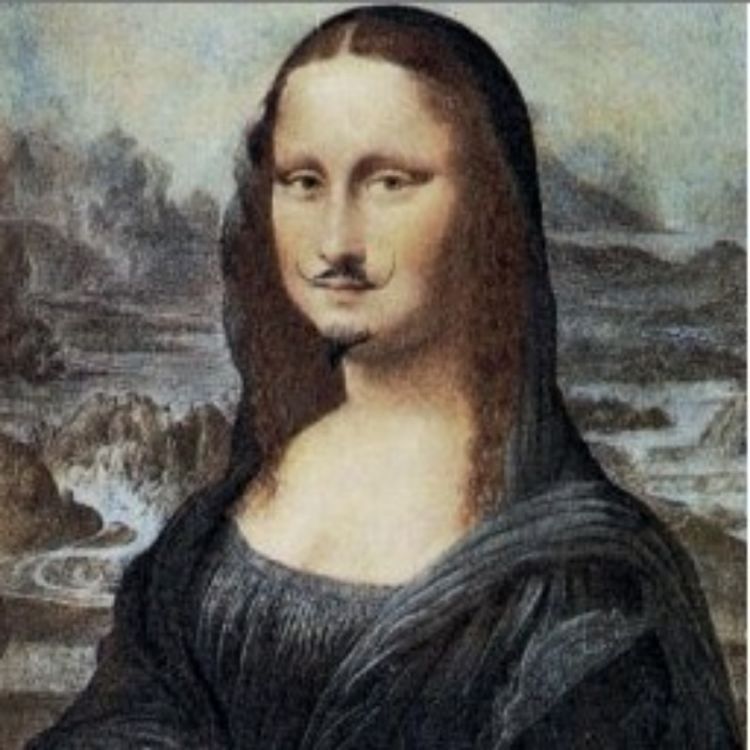 Or… sexier than ape cartoons.

My head, it shakes. Because no matter how seriously and soberly one might approach the financial dilemma of bringing promising technologies to maturity by broad investments, there are always hand-scrawled love notes, or pictures of pictures, or the newest version of L.H.O.O.Q., not to mention instant toothbrush delivery schemes to entice the ridiculously wealthy or even the passingly prosperous. It’s a problem:

Tony Fadell, who spent most of his career trying to turn emerging technologies into mainstream products as an executive at Apple and founder of Nest, said that even as the world faces the risks of climate change, money is flooding into less urgent developments in cryptocurrency, the so-called metaverse and the digital art collections sold as NFTs. Last year, venture capitalists invested $11.9 billion in renewable energy globally, compared with $30.1 billion in cryptocurrency and blockchain, according to PitchBook.

Of the $106 billion invested by venture capitalists in European startups last year, just 4% went into energy investments, according to PitchBook.

“We need to get real,” said Fadell, who now lives in Paris and has proposed ideas on energy policy to the French government. “Too many people are investing in the things that are not going to fix our existential problems. They are just investing in fast money.”

Even so-called ESG funds and investor movements run the risk of becoming fads, passing, allowing a regression toward the mean, also know as same old, same old. Governments have to do more to leverage current investments and attract new. But there also has to be some boring seriousness to guide the reckless speculation, as contradictory as that sounds. Otherwise, we’re still speculating alright, on something.

Image: Not a new version. Duchamp would be kicking himself NBA commentator Jeff Van Gundy’s well-placed, near-extemporaneous “back at the crypt” comment notwithstanding, ubiquitous references to crypto currency range from annoying to cloying. Everything about digital money is either scammy or… that seems to be mostly it. Scammy neatly encompasses the over-hyped, Ponzi-schemed, last-one-in nature of the the collection of binary data that necessarily requires us to put all the usual finance-related terms in quotes: “ownership” “collateral” “token” “transaction.” You could go on.

And besides the obvious downsides of NFT’s – from terrific money-laundering possibilities to the proliferation of really bad art – we’d be remiss in not noting crypto’s climate impacts:

Crypto’s overall climate impact remains massive, with certain currencies swallowing up entire nations’ worth of processing power from individual computing units and data centers—much of whose power comes from fossil fuels. The most common form of cryptocurrency mining, proof of work, requires a massive amount of processing power. Alternative mining methods have a mixed track record so far, with some ostensibly “sustainable” mining systems still requiring significant amounts of dirty or clean power. And transacting any tokens across the blockchain, whether an NFT or a Litecoin, sucks up the collective energy feeding into the transaction, no matter the product at hand. One estimate claims that a single NFT trade across the much-used Ethereum blockchain uses enough energy that could power an entire house for several days. And this is all so the buyer can have bragging rights about “owning” an image.

Celebrities who are selling NFTs and also claim to care about the environment: What are you doing? Whatever it is, there sure are a lot of you. Here’s a list—surely incomplete—of luminaries who brand themselves as climate-conscious yet have also been hawking NFTs in some form or the other, ensuring this bizarre digital culture product will linger in the public discourse while possibly ruining the art world, the planet, and our collective sanity.

Not even-close-to-exhaustive list of scam-adjacent proponents at the link. Yes, engaging in yet another form of workaround for doing not the things we need to do about global warming: what are we doing? The climate question at the center of everything, that we’ve been needing to ask for decades, that we still need to answer.

Image: the crypt in question

As public investments go, there’s one and then there’s the other. Let’s compare this:

Minnesota soon could see at least a sevenfold expansion of solar power.

In an unprecedented ruling, a judge reviewing whether Xcel Energy should invest in new natural gas generators vs. large solar power arrays concluded Tuesday that solar is a better deal.

If the finding by Administrative Law Judge Eric Lipman is upheld by the state Public Utilities Commission (PUC), Edina-based Geronimo Energy plans to build about 20 large solar power arrays on sites across Xcel’s service area at a cost of $250 million.

“It says solar is coming in a big way to the country and to Minnesota,” Geronimo Vice President Betsy Engelking said of the ruling.

Geronimo’s Aurora Solar Project would receive no state or utility subsidies, but would qualify for a federal investment tax credit. Engleking said it is the first time in the United States that solar energy without a state subsidy has beaten natural gas in an official, head-to-head price comparison.

“The cost of solar has come down much faster than anyone had anticipated,” she said in an interview. “This is one of the reasons solar is going to explode.”

Revel has been, to put it lightly, a disaster. Originally imagined as more of a resort than a casino, Revel cost $2.4 billion to open. Even before Revel opened it was considered a high risk investment in a city already on the decline due to gambling competition from Delaware and Pennsylvania. Progressives opposed state investments in the project which came during the same time Governor Christie was cutting education and healthcare services for women. Christie invested $261 million of New Jersey tax money via credits as Morgan Stanley backed out of Revel fearing it was a loser.

Not soon after Revel opened it became clear the resort idea was as dumb as many thought it was and “Revel Atlantic City” went into bankruptcy. The bankruptcy put the State of New Jersey on the hook as Revel announced that the casino’s value had dropped from $2.4 billion to $450 million. Ouch.

So these arguments about public infrastructure and investment as economic development are all just gas baggery if actually beneficial projects aren’t part of the calculus. And even that argument aside, solar’s ascendancy seems clear. But we shouldn’t leave it to the side at all – that’s the point. Hydrocarbon energy production will begin to loses its privileged place regarding public support (and hopefully casinos as well) and the howling will be intense. But make no mistake about how we’ve been explicitly supporting senseless gambling/retail fiascos for so long. A turn toward making sense might someday actually feel like it does.

Multiplied by area. We’re already getting our asses handed to us on the renewable energy front. Foot-dragging, slow-walking… whatever you want to call it, it all amounts to the same thing.

China’s leaders are investing $12.6 million every hour to green their economy. Other countries are equally energetic in their embrace of alternative energy technologies; they are setting targets and investing billions of dollars to spur the development of entirely new markets in wind, solar, geothermal, biofuels, energy efficiency, high-speed rail, and other clean and innovative solutions to global warming.

The United States, too, is poised to transform its economy to create millions of new jobs and help create a cleaner, safer planet by investing in a green, renewable-energy based economy. The Obama administration wants to unleash the ingenuity of our private sector to rein in pollution and put millions of Americans back to work. Yet China is spending twice as much as the American Recovery and Reinvestment Act spends to lay the foundations for a green energy economy, despite the U.S. economy being 1.5 times as large as China’s. And across Europe and Asia, other governments have diversified their energy portfolios and encouraged entrepreneurs to start and expand clean and renewable energy companies.

Nice graphs and pics at the link. But for all the gnashing of teeth about what China and India won’t do about their greenhouse gas emissions, China is seeing the opportunity to pivot as a chance to take at least a couple of steps ahead. The whole anti-Kyoto rationale has been pure canard a l’orange the whole time, doncha know.

And Germany is leaving us in the dust, as per usual. But no… we wouldn’t want that old gummint telling us what to do, with all that fancy talk about energy portfolios and tax incentives. When will we have had enough of bringing up the rear on a brighter day?