Let’s keep track of these things, shall we? 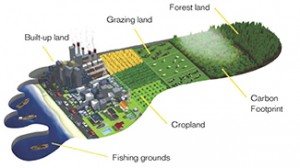 On this day in August 2015, humans have used an entire year’s worth of the Earth’s natural resources, according to the Global Footprint Network.

Calling it Earth Overshoot Day, the group celebrates — or, rather, notes — the day by which people have used more natural resources, such as fish stocks, timber, and even carbon emissions, than the Earth can regenerate in a single year. It’s basically a balance sheet for global accounting.

“We can overuse nature quite easily,” Mathis Wackernagel, president of the Global Footprint Network, told ThinkProgress. “When you start to spend more than you earn, it does not become immediately apparent. But, eventually, you go bankrupt.”

How many Earths would it take… it seems as though the personal responsibility zealots among us would key into this logic, except for the great climate change hoax, which of course has nothing to do whatsoever, nosiree, with our  collective and per capita energy consumption. It is an interesting proposition: Four months left to go in the year, two of them likely pretty frosty for most people, and we’re out of everything?

So Newscorp declares its global operations to be carbon neutral. The question is, why?

The News Corporation, the media conglomerate and parent company of Fox News Channel, has gone carbon-neutral, fulfilling a goal set four years ago, Rupert Murdoch, the company’s chairman, announced this week in a companywide memo.

“We have become carbon-neutral across all of our global operations, and we are the first company of our kind to do so,” Mr. Murdoch wrote. “We made a bold commitment in 2007 to embed the values of energy efficiency and environmental sustainability into all of our businesses — for the benefit of our communities and our bottom line.”

Mr. Murdoch added that improving the energy efficiency of the company’s day-to-day operations had not only curbed emissions but also “saved millions of dollars.”

Meanwhile its most visible media properties continue to serve as a refuge for climate change deniers and carbon trading skeptics. Someone is being played here – Newscorp understands that renewable energy and reducing their carb on footprint is smart business, as is publicly trashing environmental concerns – at least for a while longer. My guess is that if you surveyed the most successful multinational corporations, you’d find most of them doing the same thing, even as they continue to support rightwing causes like the Tea Party and the Chamber of Commerce. It’s all good. Business.

Next up: Liberty University to provide same-sex partner benefits.