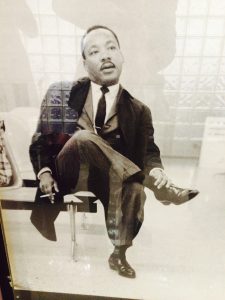 Like smartphones teach us to be dumb – to not know things, to not be able to find our way except by using the device – we are also learning how to forget the past. Or how to remember it inaccurately, disconnected from the forks in the road where our path darkened and we lost something irretrievable, something we did not make nor deserve but that came from us and birthed us, was us, the best and the worst, that pushed us in the right direction because we were scared to go on our own until we learned we could pull ourselves there if we could just join enough hands.
April 4, 1968, the Lorraine Motel, Memphis, TN, the alternately riotous and trippy sixties, the whole twentieth century, came crashing to a sudden end.
Now, 50 years into the 21st we wonder how long it’s going to last. This should not be our mindset; it wasn’t his. Is there an ideal that’s not an ideology? Is there optimism greater than hope?
Can we contemplate the breadth of shared possibility? How much justice will the market allow? The answers are not in your phone. If We Pretend Those Bookish Conservatives on NPR are The Party
I suppose this is a proved fucking right kind of post, but there’s value in everyone else finally having to acknowledge it, if for only a few weeks or so. We’ve had decades of Very Serious Pundits ignoring both the words and deeds of the Republican party, and completely ignoring the words of Republican voters, in order to ignore the racism, misogyny, homophobia, and xenophobia that is a huge motivator for many of those voters and the people they elect. Only silly internet commenters (mostly) ever saw, or at least admitted to seeing, this reality, and got painted as irrational extreme partisans as a reward. I’m not happy about being right, but I am happy about some other people finally having to notice, or to stop pretending to not notice.

We didn’t point out the racism so that our team, Team D, could win the match, we pointed it out because it’s there and it’s repugnant. I’m not even sure that pointing it out helps Team D win the match.

Having been a guest on and had projects promoted by pubic radio, and of course plenty steeped in my own public television-ness, I don’t want to seem disingenuous or an ingrate. But the nice people that represent Republicans in these media are not the ones in the party, in office or that go to the polls. You could even make the case that some of most pleasant-seeming ones are among their nastiest partisans. At any rate, what Atrios said.

Good grief. As a writer and filmmaker, I’ve got at least two dogs and three cats in this fight (never attempted to get on this show, but all other conflicts apply). But still, come on:

Last night was the fourth season premiere of HBO’s Project Greenlight—a Matt Damon and Ben Affleck passion project where they give first time filmmakers the chance to make a movie. It also provided a platform for Matt Damon to deliver a masterclass in whitesplaining—a whitesplaining sermon, if you will.

They enlist a group of producers to help them choose their finalists—the group included a bunch of white guys and one white woman.

The finalists are flown to Los Angeles to meet in person with the producers. At these meetings, they introduce Effie Brown, an experienced Hollywood producer and a black woman. She has produced seventeen feature films, including Dear White People and boy, the Irony Gods are working overtime today.

As the only person of color in the group, Effie clearly understands that any attempt at diversity will be on her shoulders. She recalls growing up in the 1970s where most of the time when she saw black people in films, they were playing gangsters, criminals and prostitutes. She also explains that she is passionate about making films where marginalized people are recognized.

You would have to buy a Brooklyn Bridge-sized benefit of the doubt to just turn around and give them in order to believe this sequence was included in the episode to show the transparencies of inherent bias in Hollywood. No, I don’t believe that either. Come on, Matt. This is embarrassing.

Rest in peace. I’ll never forget going to see him on his U.S. tour after his release. More on that later. Now, grief.

The Onion nails it.

But with all of its makings for showing us our own resilience, the week has left us permanently poorer with the death of Scott Miller.

I won’t excerpt it, but go read some his music criticism/appreciation in Music: What Happened? and then listen to Game Theory’s Lolita Nation.

As I’ve mentioned previously, one of the many tender mercies of walking to work everyday is that I don’t subject myself to NPR nearly as often as I once did. One of the painful reminders of this is when I take the green kids to school once in a while and find self so enthralled again, just like old crappy times.

So this morning, as it so happens and I only mention because it was such a softball non-story to get right that they whiffed on so badly that I must.

A discussion, and it’s probably online somewhere but I will not take the .000784 seconds required to find it, about new Secretary of State John Kerry and how he was forced during his presidential campaign to play down his foreign language proficiency but is now flaunting it. Fine. And they played a snip of him during a lunch in Paris saying something completely gracious to his hosts, and then another of him being so comfortable with a Turkish official that Kerry forgot to listen to the translation – insinuating that his elitist languagism was somehow at fault and it was a terrible low point. Or something.

Listen. How hard is it? How difficult is it to highlight Kerry’s ability to communicate with his DIPLOMATIC counterparts in French, Italian or German as an example of an unadulterated good? Why not point out how relieved we all might be for the moment that his international colleagues might feel the least bit respected by being addressed in their language by an American in their country? Further, maybe go on to ask other intriguing questions: What does language do? What is it for? How do you learn other languages? What possibilities for friendship, cooperation, romance or just understanding might it unlock?

Instead I explain the idiocy of man-bites-dog to green boy. I’ll stop raging on NPR when they stop reporting the news like dopes.

Not the first man you might imagine when it comes to peace, but rest now he does. The rough week continues, and while this one isn’t strictly personally, it certainly feels personal. Our favorite art critic Robert Hughes (1938-2012).

When he reached a mass audience for the first time in 1980 with his book and television series The Shock of the New, a history of modern art starting with the Eiffel Tower and graced with a title that still resounds in 100 later punning imitations, some of the BBC hierarchy greeted the proposal that Hughes should do the series with ill-favoured disdain. “Why a journalist?” they asked, remembering the urbanity of Lord Clark of Civilisation.

He gave them their answer with the best series of programmes about modern art yet made for television, low on theory, high on the the kind of epigrammatic judgment that condenses deep truths. Van Gogh, he said, “was the hinge on which 19th-century romanticism finally swung into 20th-century expressionism”. Jackson Pollock “evoked that peculiarly American landscape experience, Whitman’s ‘vast Something‘, which was part of his natural heritage as a boy in Cody, Wyoming”. And his description of the cubism of Picasso and Braque still stands as the most coherent 10-page summary in the literature.

And that’s some Hughes we can always use.