Some time ago, as I was going through Ruskin’s Fors Clavigera, I would re-type sections into a message for a good friend, C______. Herein are some of the reasons we were so locked-in with the heart and mind of the Victorian savant:

The second major stage of his career may be said to begin in 1858, when Ruskin was visiting Turin and, having been depressed by a boring and stupid sermon, saw Veronese’s painting of King Solomon and the queen of Sheba. He was utterly overwhelmed by the sensual immediacy of the work, which seemed to him far more obviously true than the spectral doctrines of the Christianity whose hold on him had been gradually (though insensibly) loosening. He experienced what he later called his “deconversion,” and this lasted for nearly twenty years. This was the period of Ruskin as political economist—though, thanks to his incapacity to separate the forces that most of us find it convenient to separate, his thoughts about political economy were always connected to his aesthetic convictions and even (though in a new and often subterranean way) to his deep and detailed knowledge of the biblical call to justice.

The major product of this period of Ruskin’s life was the collection of monthly pamphlets known as Fors Clavigera. Ruskin thought of these pamphlets as open letters: the full title of the project was Fors Clavigera: Letters to the Workmen and Labourers of Great Britain. After decades of work as a historian and critic of art and architecture, Ruskin had come to believe that (1) the arts of his own age were, generally speaking, far less excellent than they should be; (2) that those deficiencies were inevitable by-products of a corrupt system of political economy that promoted profit for the industrialist above all and so enforced impersonal efficiency and productivity over the flourishing of makers and craftsmen; and (3) that, therefore, a critique of political economy must be articulated before anything else. The political economy of Britain had to be altered so that the conditions of labour could be improved so that the arts could be renewed so that persons could thrive once more. Thus Ruskin’s first major exercise in this endeavour was a series of 1857 lectures published as The Political Economy of Art.

EmPHAsis added. I can love some old-fashioned-y-ness, especially retro-fit with eye shadow and boots of punk or, like here, the scholarly sense of seeing so many things as inseparable. 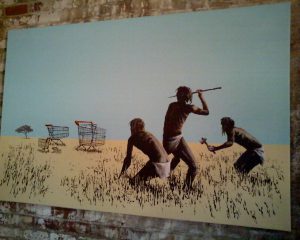 At the outset of the newest year, with walls incoherently at the center of our discourse as we contemplate how best to keep people out rather how best to help them up, a bit of perspective provides a reminder that we might be mixed up about parts of the story:

For most of their history, humans lived in tiny egalitarian bands of hunter-gatherers. Then came farming, which brought with it private property, and then the rise of cities which meant the emergence of civilization properly speaking. Civilization meant many bad things (wars, taxes, bureaucracy, patriarchy, slavery…) but also made possible written literature, science, philosophy, and most other great human achievements.

Almost everyone knows this story in its broadest outlines. Since at least the days of Jean-Jacques Rousseau, it has framed what we think the overall shape and direction of human history to be. This is important because the narrative also defines our sense of political possibility. Most see civilization, hence inequality, as a tragic necessity. Some dream of returning to a past utopia, of finding an industrial equivalent to ‘primitive communism’, or even, in extreme cases, of destroying everything, and going back to being foragers again. But no one challenges the basic structure of the story.

There is a fundamental problem with this narrative.

Overwhelming evidence from archaeology, anthropology, and kindred disciplines is beginning to give us a fairly clear idea of what the last 40,000 years of human history really looked like, and in almost no way does it resemble the conventional narrative. Our species did not, in fact, spend most of its history in tiny bands; agriculture did not mark an irreversible threshold in social evolution; the first cities were often robustly egalitarian. Still, even as researchers have gradually come to a consensus on such questions, they remain strangely reluctant to announce their findings to the public­ – or even scholars in other disciplines – let alone reflect on the larger political implications. As a result, those writers who are reflecting on the ‘big questions’ of human history – Jared Diamond, Francis Fukuyama, Ian Morris, and others – still take Rousseau’s question (‘what is the origin of social inequality?’) as their starting point, and assume the larger story will begin with some kind of fall from primordial innocence.

It’s from earlier in 2018, but read the whole, etc. There is no ‘them’ but there are assumptions and many of ours may be wrong or at least worth re-considering.

Banksy image from the original.

So what does it mean when solar power generation starts to become cheaper than fossil fuel power? Via, Juan Cole, looks like we’re about to find out:

In a note this week in advance of the disruption report, Citi’s Jason Channell said that in many cases, renewables are already at cost parity with established forms of electricity sources.

The biggest surprise in recent years has been the speed at which the price of solar panels has reduced, resulting in cost parity being achieved in certain areas much more quickly than was ever expected; the key point about the future is that these fast ‘learning rates’ are likely to continue, meaning that the technology just keeps getting cheaper.

Below is a chart showing where “socket” or grid parity has already been achieved. (Grid parity is when a source of power becomes cost competitive with other sources.) The lines represent the pattern of expanding solar power in a given year — so at peak solar exposure, parts of the southwest U.S. are now already capable of meeting their electricity needs via solar panels.

Check out the graphs at both of those links. Cole also notes that important new research shows that hybrid power plants that have both solar and wind turbines dramatically increase efficiency and help with integration into the electrical grid. So while TV viewers have been distracted by herrings like Solyndra, utilities and leaders in other countries have been racing this technology to market. This is the dull edge of being led by a media-politico complex beholden to corporate paymasters, of having a nation that thinks of themselves as consumers instead of citizens. We have debates on the causes of global warming that are completely beside the point. Our giant corporations aren’t even acting like good capitalists, but rather fearful protectors of dying industries – maybe that’s the same thing. But they’re perfectly willing to string along as much of the public as possible for as long as they can, by sowing as much doubt as is possible about changing the ways we light up the night, drive to the store and cool our heels. Meanwhile, in other parts of the world: lower bills, lower carbon emissions, now types of manufacturing and careers… But not here – not just yet. And all just to wring every last bit out of the old ways of doing business. It’s beyond pathetic.

But this is what we have handed over to America, Inc. This is their leadership, and instead of innovation, we will begin to are hearing about how we need to protect fossil utilities when demand from their product collapses. Not kidding. They see renewable energy as a threat. so as this happens, the expected reaction of the fossil power industry resembles some version of the 5 stages of mourning.

So can we get on with the anger and bargaining, please?