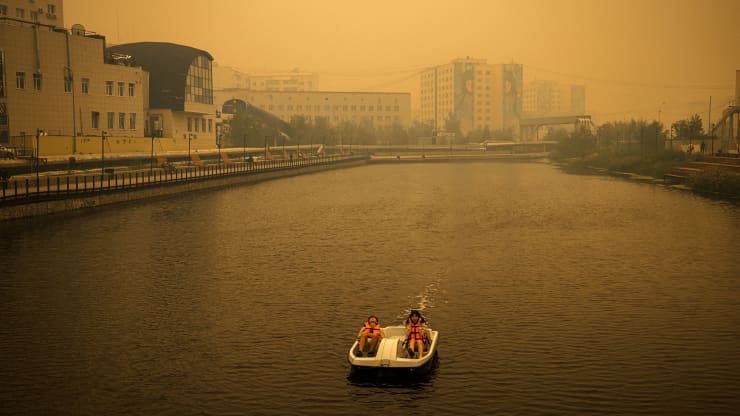 With apologies to the accusers working hard to hold their abusers to account, the impacts of human activity on global warming are taking center stage this week:

The world’s leading climate scientists on Monday delivered their starkest warning yet about the deepening climate emergency, with some of the changes already set in motion thought to be “irreversible” for centuries to come.

A highly anticipated report by the U.N.’s climate panel warns that limiting global warming to close to 1.5 degrees Celsius or even 2 degrees Celsius above pre-industrial levels “will be beyond reach” in the next two decades without immediate, rapid and large-scale reductions in greenhouse gas emissions.

To be sure, the 1.5 degrees Celsius threshold is a crucial global target because beyond this level, so-called tipping points become more likely. Tipping points refer to an irreversible change in the climate system, locking in further global heating.
At 2 degrees Celsius of global warming, the report says heat extremes would often reach critical tolerance thresholds for agriculture and health.

U.N. Secretary-General, António Guterres described the report as “a code red for humanity.”

“The alarm bells are deafening, and the evidence is irrefutable: greenhouse gas emissions from fossil fuel burning and deforestation are choking our planet and putting billions of people at immediate risk,” Guterres said.

Every previous supposed estimate had been watered down to re-assure the consensus that all of this was far enough away in time not to worry about. A little tweak here or there was all that was needed, and no time soon. Well guess what? It’s no time – soon. What are we doing and how much more can we do must be the only questions. The Earth will change and re-establish some equilibrium, and humans may or may not be a part of that. We don’t seem to understand that last part, and we’re warning ourselves that we are running out of time.

Image: A couple rides a pedal boat as smoke from nearby forest fires hangs over the city of Yakutsk, in the republic of Sakha, Siberia, on July 27, 2021.
DIMITAR DILKOFF | AFP | Getty Images Trying to prove to the bully you are not what his taunts describe, on the presumption that he will finally admit, “You know, you’re right. I’m sorry. You’re really not a _____.”
Cornered by logic, the garbage person – receiving constant affirmation from otherwise ‘neutral’ observers and aficionados alike – finally relents? He wouldn’t know how, he would lose all credibility because the bullying is his only reliable trait. The challenge to not enjoy his taunts on the playground is especially difficult for people like us. We’re as depraved and morally listless as he, he just has no qualms or shame in providing us the rage we need to sustain him. Circle, and vicious as it gets.

Because we have some better idea of ourselves – standards, values, whatever words we use to signal we know and are better. We grow taller but we don’t grow up. Hatred and contempt are strong collective experiences, especially when the bully provides the cover. It’s as though he is ‘taking the bullet’ [which he would never], getting the flack, wearing his vileness like a badge instead of us. He’s the one, and we’d never do that, be like him, though it is the tacit support that bleeds us like a mortal wound.

And what of the focus of the harassment and intimidation that is so alluring, how to fight back?

The question is, are you ready to fight back? Addressing his smears head-on creates the potential for greater vulnerability; you’ve provided credence, confirmed the weakness to which the bully re-commits himself and his acolytes to torment and its enjoyment. Standing up and pushing back is a dirty, ugly business and you will get dirtied and come out at least a little uglier but the bully knows no other language. There is dignity in ignoring the taunts, but this also requires massive courage and stamina. Something is still going to be in your way. Was it always there? Mmm. I think that’s enough for today’s session.

That’s some kind of dystopian corporation of the future, sort of like Executive Outcomes. Remember that? Now try to dig up that Harper’s article from 1997; it’ll learn ya.

So… you wouldn’t think that an article on eliminating college football would be relevant on a blog like this. But then you didn’t name your blog this either, did you? Oh, Wall Street Journal, reminding me that Eco also stands for economy:

Who truly benefits from college football? Alumni who absurdly judge the quality of their alma mater based on the quality of the football team. Coaches such as Nick Saban of the University of Alabama and Bob Stoops of the University of Oklahoma who make obscene millions. The players themselves don’t benefit, exploited by a system in which they don’t receive a dime of compensation. The average student doesn’t benefit, particularly when football programs remain sacrosanct while tuition costs show no signs of abating as many governors are slashing budgets to the bone.

I’m down with his argument in many ways, but this part of it reminds me of a near exact parallel with the sacrosanctity of military spending in our larger budgetary reality. It is Eliot Ness. It is untouchable, all other things being up for negotiated elimination. Which is itself a reminder of what our government is becoming: an insurance company with an army.

But, to the point about college football green and the NCAA’s reluctance to part with it. No solutions are just going to prevent themselves, until the sport completes its slide toward boxing – and with solutions like, who needs problems? The idea of a triple AAA minor league paid for by the NFL seems like a no-brainer and will only take a little getting used to. In business speak, they’ve already created demand for their product, and maybe even overshot that. Time to re-route the supply.