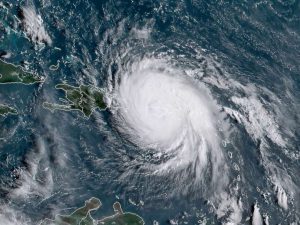 Though tropical cyclones can also gain strength over land, we have seen and experienced elections decided at the outer bounds of rationality, not to mention national borders. And the same goes for scandals. When the two are one and the same, we reach a distinct crossing over into all manner of non-metaphorical winds, downed trees, powerlessness, looting even.
Still it’s important to realize that the fundamental strength of the storm comes from good old warm water in open ocean, just as the current, inspired presidenting comes from heartland voters and good christians everywhere. Sure, climate change and the Russians probably had something to do with the current disasters. But really they were only helping fuel the storm.

There remains a very deeply held taboo on bankruptcy, even in this country, even now. The US now owns many of its banks, what’s left of its major automobile manufacturers and will likely soon see many more of its larger entities descend into some type of creditor protection and re-organization. Notice a pattern here, as our largest everythings achieve epic fail? We shouldn’t be too shy about this, nor too averse to the more figurative implications of re-organization, at least until someone adds a snappy jingle and uses it to advertise their product.

Re-organization – of what we make, what we eat, where live and how we get there – should be what we’re after. Indeed, even if you’re only watching the televised version, that what’s we’re seeing.

There’s nothing to say that we’ve got to necessarily revert to some brutish, Hobbesian state of nature. And there is actually quite of bit to recommend that we do not.

But I won’t try to put a positive spin on it, and not because it’s getting that much more difficult to explain how the economy will return to growth at some point in the near future. The point is that, as scary as it may seem initially, all of these terms should be seen as negotiable. For instance, if we suddenly were to question when, much less whether, this economy will return to growth, the possible answers become so much more abundant. That’s what we’ve always been about – possibilities. And that’s what seem so limited now, when we’re reduced to watching the DOW for positive signals about… our own hope and happiness. If we start looking at other, more tangible indicators – acknowledge what is already broken and defunct – we can begin the actual transition that now only takes the shape of clearance sales, emptying malls and vague unemployment statistics, which attempt to make sense of an epic collapse in some positive way without confronting its most obvious implications.

We should admit it; we’re afraid to be afraid. And it’s all about uncertainty. Let’s go ahead and become convinced that the economy we’ve built is over, become afraid about not knowing what will happen and get it over with. This is already the case, anyway, despite the illusion of the scrolling green carpet offered by your financial planner, mapping a secure path into the future. We tell children all the time that the scariest things usually end up being not that scary; it’s advice we would do well to heed and stop guarding this carcass of a model that, as great as it has been, is still starting to smell.

Philip II of Spain declared state bankruptcy 4 times between 1557 and 1596, primarily a result of an illusory flow of resources from the New World. That would be us, and ‘making do with more‘ is a mantra that has served us as well as it did him. So, what can we make out of the broken table?