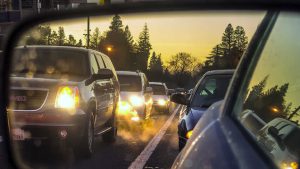 This editorial from the LAt brings up an interesting situation that we’re already in, as the EPA leans toward issuing a ruling on whether greenhouses gases are a danger to public health. If they do, which they are likely to, it will lead directly to some forms of preliminary carbon dioxide regulation. It’s going to be difficult and people are going to be screaming; driving a car is going to get more expensive when everything else already is. But is it the end of the world? That’s an interesting question.

Firmly focused on the downside is the U.S. Chamber of Commerce, which has long argued that a climate-change crackdown would devastate Main Street America, imposing costly permitting requirements on such facilities as schools, hospitals and office buildings. Reacting to news of the pending EPA finding, chamber officials are even claiming that it would undermine President Obama’s economic stimulus package because infrastructure projects to be built with the money would be delayed by reviews of their impact on greenhouse gases.

Not really. The EPA finding would apply only to emissions from vehicles. If the agency does find that they endanger the public, it would add urgency to a process that’s already underway to toughen fuel-efficiency standards. Eventually, it might also lead to regulation of emissions from other sources, particularly power plants. But that’s years away, and onerous rules for schools and offices are unlikely. As for the stimulus money, most or all will be spent by the time the EPA gets around to regulating new construction.

It’s already really expensive to drive a car, only we don’t count all of the negative externalities as costs. These would include, of course, tailpipe emissions but also everything from the human design fiasco that is our highway-connected suburbs to the strips of fast-food joints that line them to the talk radio poison we self-inject sitting in so much traffic everyday. This is to say nothing of the wars and armaments necessary to safeguard said sources of earlier-described dangers to public health. No hyperbole is necessary to see all the ways we could begin to change how we live just by taking their real costs into account – not to mention, as the editorial does, the costs of doing nothing.

So get ready for the rending of garments as the EPA is demonized and carbon pricing construed as the end of civilization as we know it. There’s an irony I will not explain (Mean Joe?). The EPA will be doing its job in accordance with our laws. As the editorial points out, there will be winners and losers in so doing. But, in reference to the above, why shouldn’t we see ourselves as winners in this grand scrum, focusing on the things we will decide to change as positive steps?