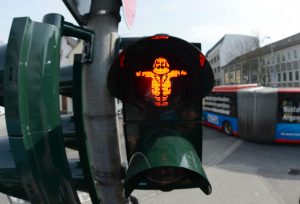 Via IC, notoriously unreliable fuel source causing chaos in California. If California is the future and $5 gas prices are the present, are you still following me and I don’t mean on the twitter machine?

Unless he’s been reading the news, my neighbor probably has no idea that California is enduring a sudden, surprising and, for other people, very painful spike in gasoline prices, which in some parts of the Southland have crossed the $5-a-gallon mark. This is creating a serious economic hardship for many. After all, not everybody can afford a $35,000 electric car to replace their gas-guzzler, and $90 or more to fill the tank of an SUV is real money. That got me wondering: When you consider all the costs of owning and operating a new car in this environment of soaring gas prices, is my neighbor a genius or a chump?

The U.S. Department of Energy’s Alternative Fuels Data Center has an interesting tool on its website for comparing the costs of fuel and ownership of nearly every motor vehicle sold in the U.S. I compared my neighbor’s Leaf to seven other popular 2012 gas-powered models, including the hybrid Toyota Prius, given current local electricity prices and figuring the average current price of gas at $4.75 a gallon. Here’s what I came up with:

Fuel costs for the Leaf come to 22 cents per mile, far lower than any other car on my list (the other models I picked, besides the Prius, were the BMW 328i luxury sedan, Ford Focus compact, Honda Civic compact, Honda CR-V crossover, Mini Cooper subcompact and Toyota Camry sedan). The popular Prius hybrid, no surprise, was the next cheapest to fuel, at 29 cents per mile. Closest behind were the Focus at 33 cents per mile and the Mini at 34 cents. Turning to annual operating cost, the Leaf is again a big winner at $2,629, followed by the Prius at $3,407, the Focus at $3,985 and the Mini at $4,031. The most expensive vehicle on my list to operate was the 328i at $4,998, but I doubt many Beemer owners care.

I don’t wish it on you but gas prices are going to climb, just we were saying four years ago – check the archives there to your right. All of that still holds. Live where you can ride a bike, train or walk. Restart your conversations. With people.