I’ve been getting too far away from the marketing end of this phenomenon; there are just too many tall weeds in every direction, it’s like fishing from a submarine. So let’s over-correct. Evidently, consumer recall of ‘green’ (I’m beginning not to know which word to put in quotes) messaging is very high, with more than a third saying they are in the pocket and know what they companies mean when they say it. Nonprofits have know this for a while. Greenpeace took it’s very name from combining two words outside of their common usage. And remember, they’ve been around since 1971. Fashion brands, like the Diesel ad above, have been going meta on this for a while, offering their products as ‘global warming ready’ and similar tripe, spooning what remains of cheeky glamour onto the crisis just for good measure. No wonder, I mean we seem ripe for it and the extent to which they’re sure we already understand the concept necessarily means they in turn must now include a blast of detached irony with every pair of jeans.

But the non-news that it works to identify your product with this new NEW, as it were, is essentially what our own little virtual inland empire here is all about, that we should define green before it becomes the old new, or whatever. The added folly is that what the ad trends are latching onto IS actually about something that matters, a something that could contribute to the solution though it – conservation, knowing where your stuff comes from – will necessitate the disappearance of most of the products now touting greenery. How’s that for ironicality.

Case in point. To demonstrate at least the partial failing of the truth above, I saw a couple of versions of a green TV ad this weekend, I think it was IBM but I can’t remember(!). Anyway, the commercial/video, which took place in an elevator with an attractive young woman and dorky guy, said very little about green other than IBM or HP was going green. No big surprise that it neither described much less explained what or how they were going envy or young or enviro. But they were advancing the ball down field, and like the surveys report, I’m sure more than a solid third noticed.

They didn’t need to talk about green; it was embossed in the commercial with a cartoon tree and animals chirping around in the elevator. Things were changing, she explained to the dork. And indeed they are.

The style was very much like this. They might be the marketing genii who are bringing the green, but it can’t be just them. So watch for this sorta new imprimatur on more and more ads. The ad companies are realizing that they should just take stylistic shortcuts with things they can’t or don’t want to explain, as if that’s all you need or want to know anyway.

Not to say that stylistic shortcuts aren’t legit, as you can see. 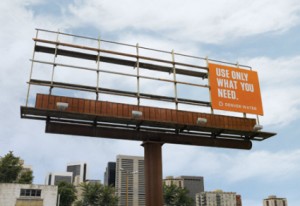 They just need to choke up on the side of substance, then swing for the fence.