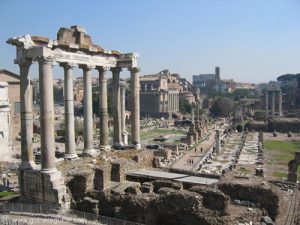 In actuality, the acquisition of the right to vote by those outside the city had little meaning to all but the wealthy. Membership in the Roman assemblies was not done by election – it was a direct democracy. Voting was done by tribes, and all citizens were assigned to a particular tribe (often based on wealth) where each tribe voted as one. However, to vote a person had to appear in person which was something only the wealthy could afford to do. But citizenship was not eternal. If necessary, an individual’s citizenship could be revoked; this latter condition was mostly reserved for criminals.

Every five years a citizen had to register himself at the Villa Publica for the census, declaring the name of his wife, the number of children, and all of his property and possessions (even his wife’s clothes and jewels were declared). Every Roman citizen believed the government had a right to know this information. All of this data was reviewed and evaluated by the city’s magistrates (censors) who could “promote or demote each citizen according to his worth.” Tom Holland wrote on the value of the census, “Classes, centuries, and tribes, everything that enabled a citizen to be placed by his fellows, were all defined by the census.”

Juxtaposed to discussions at the Supreme Court today:

Multiple times during Tuesday’s hearing on the Trump administration’s move to add a citizenship question to the census, Gorsuch returned to vague allusions to an unsuccessful 2016 Supreme Court case that dealt with that possibility.

Gorsuch’s lines of inquiry didn’t get too much traction at Tuesday’s arguments, which mostly focused on the technical considerations of Secretary Wilbur Ross’ decision to include the question. But, in a way, they were appropriate, given that overhauling how legislative districts are drawn — a massive voting rights change that would diminish the political power of urban and diverse communities — appears to be the endgame of the current push to add the question.